A Guide to Jersey’s Historic Landmarks

All information in this blog post is correct as of the publishing date,  14.01.19.

Jersey may be best known as a holiday destination because of its beautiful beaches, equally scenic countryside and laid-back atmosphere, but the largest of the Channel Islands is also a haven for anyone who is interested in architectural and social history.

Once you have flown or taken the ferry to Jersey, you should not delay exploring some of the island’s most historic landmarks. Whilst spending all your time here sunbathing and dining at the many fine local restaurants may be enormously tempting, this guide will show you why you should dedicate at least a day or two to discovering the buildings which help tell the story of Jersey’s fascinating past.

Opening times: 10 AM – 4 PM in winter, 10 AM – 6 PM in summer. Closed on certain days throughout winter – click here for more information.

Discounts are available with some group bookings – click here for more information.

Undoubtedly the oldest surviving major historic landmark in Jersey, construction began on the famous Mont Orgueil castle over 800 years ago in 1204. Since then, the castle has survived multiple invasions, occasional periods of neglect and being battered by centuries of winter storms and is now in a better state of repair than it has ever been.

Now managed by the Jersey Heritage trust, Mont Orgueil provides a great day out for visitors to the island and is also regularly revisited by Jersey residents – which should itself be an indication of how much can be enjoyed there! Far more than just an interesting architectural site, this landmark now offers plenty of both educational and entertaining experiences for the whole family and is simply one of Jersey’s must-see attractions. 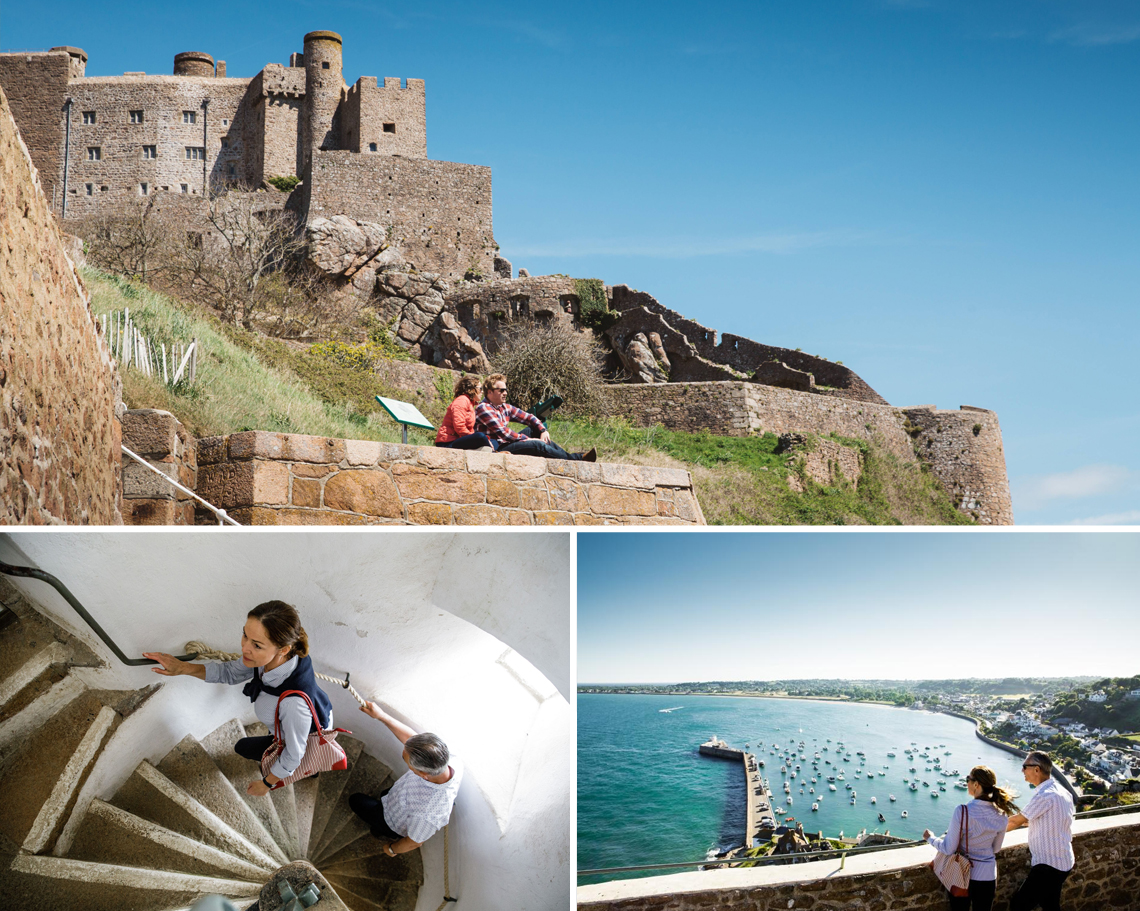 As well as the incredible views that can be enjoyed of the French coast on clear days, highlights of your visit to Mont Orgueil could include seeing unique features such as a witchcraft exhibit, an intricate network of ancient staircases and hidden rooms, and the bizarre ‘Wheel of Urine’ – it must be seen to be believed!

Remnants of every period of the castle’s colourful history can still be explored there, from the sections of the building that date back to the 13th century to the lookout posts that were installed by the occupying German forces during World War Two. Mont Orgueil acts as a fascinating time capsule which has the added benefit of being in a truly beautiful setting, overlooking the idyllic fishing village of Gorey on the island’s east coast.

Easily accessible via car and public transport and open all year round (with a few exceptions throughout the quieter winter months), Mont Orgueil is possibly the best family-friendly attraction in Jersey. The passion that the staff at the castle have for the site they look after shines through in the guided tours they offer, as well as the various additional activities that are available there, including the opportunity for kids to dress up as knights and princesses and enjoy the excellent outdoor play area.

Above prices are for castle entrance only; a small supplement will be applied for transfer via ferry at high tide. Discounts are available with some group bookings – click here for more information.

Elizabeth Castle, located on a tidal island off the coast of the Jersey capital, Saint Helier, was built in the late 16th century, essentially as a replacement for Mont Orgueil. By this time, thanks to the development of gunpowder, the older castle’s location had rendered it inadequate as being the island’s only defensive fortification. 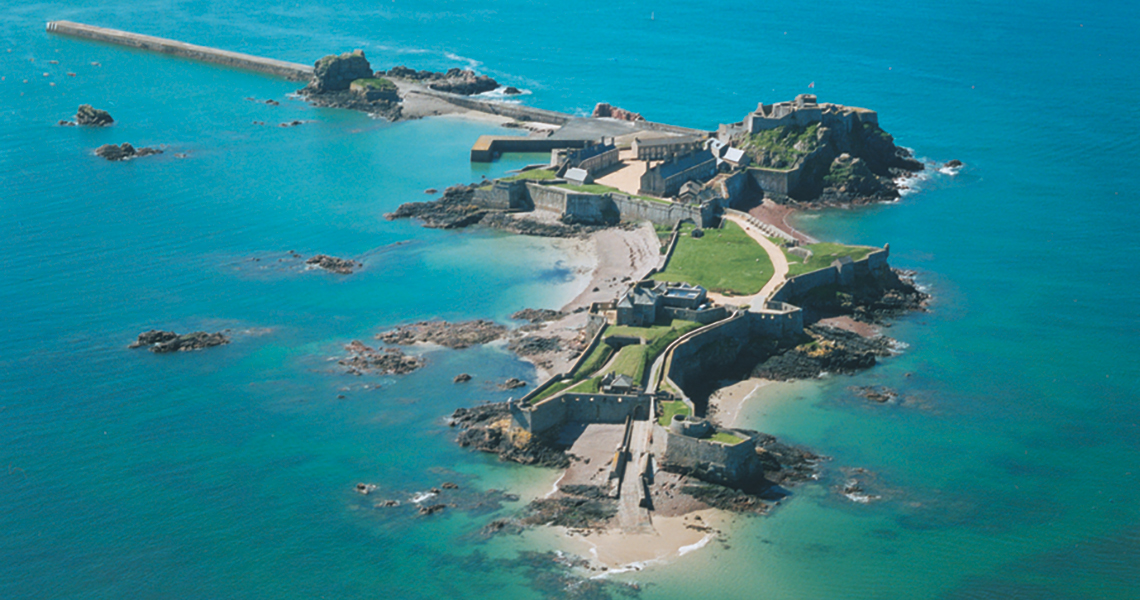 Another Jersey landmark that is in a truly beautiful setting, Elizabeth Castle can be reached by a causeway at low tide or via one of two amphibious ferries at high tide. Also administered by Jersey Heritage, the castle will be of special interest to anyone who is keen on military history; among its highlights are a museum dedicated to telling the story of the Royal Jersey Militia, as well as a separate area which focuses on how canon and fortifications have evolved over hundreds of years.

As high-quality as these museums are, however, nothing can compare with the excitement of the dramatic re-enactments which are held at Elizabeth Castle every Sunday during the summer season. Performed by a team of expert historical interpreters, this weekly ritual brings the 1781 Battle of Jersey – which saw French forces attempt to invade the island – right into the present day. As well as actors teaching visitors all about this important moment in the history of the Channel Islands, the display also includes the firing of period muskets and cannons, putting a ‘bang’ into everyone’s weekend!

The weekly battle re-enactment is not the only ‘living history’ experience that can be enjoyed at the castle, however. During the summer months, visitors will be able to meet various characters from throughout the centuries; some of the most interesting include Canon Louis, a 12th-century member of the Augustinian Order based in the Abbey of Saint Helier, and the aptly-named Robert Bloodsworth, who has the unenviable job of being an 18th-century military surgeon. Be warned, however – the doctor’s descriptions of the wounds he deals with and the decidedly primitive medical instruments at his disposal are not for the squeamish!

Guided tours of the castle and the hospital that belonged to the Georgian-era military barracks located within the grounds are also available.

The third and final fortification on our list, Grosnez Castle in Saint Ouen, is very different from the previous two landmarks we have discussed. Whilst Mont Orgueil and Elizabeth Castle are both immaculately-preserved, family-friendly attractions, Grosnez is in a state of ruin, with only certain sections of the 14th-century structure still standing.

However, much like the abbeys of Glastonbury and Whitby in England, the fact that the castle is no longer in working order certainly does not detract from its splendour. On the contrary, Grosnez is perhaps made even more imposing, romantic and impressive due to the dramatic starkness of its ruins.

Like Jersey’s other two ancient fortifications, the history of Grosnez Castle is a long and fascinating one, although the period during which it was in active use was much briefer than that of both Mont Orgueil and Elizabeth Castle. Built in 1330, Grosnez originally served as a place of sanctuary for local farmers when the island was under attack from French forces but, due to having several strategic defensive weaknesses, the castle was abandoned after a comparatively short length of time and has been in ruins since the mid-1500s.

The main feature of the castle that remains intact today is its gatehouse, which was previously protected by a drawbridge and portcullis that have long since disappeared, whilst the outlines of six buildings can also be explored. It is recommended that visitors take the time to walk down the steps at the rear of the castle to the nearby automated signal station which was built for use by the Navy in 1806, too; the station, from which messages were sent to nearby Guernsey, is interesting in its own right but is more notable for the unrivalled views it provides of Jersey’s neighbouring islands.

All of Jersey’s historic landmarks are attractive, and the most popular offer extraordinary coastal views. The land surrounding Grosnez Castle, however, is (almost) in a league of its own when it comes to finding somewhere to watch the sun go down. Be sure to time your visit so that it coincides with the sunset – it may take a little more planning, but the twilight panorama that awaits you at Grosnez is guaranteed to live long in the memory.

The focal point of Saint Helier, Liberation Square was officially unveiled as recently as 1995, but its setting is historic; the site on which the square is located has been the scene of many of the most momentous moments in Jersey’s past, including – as its name suggests – the liberation of the island from Nazi occupation in 1945. 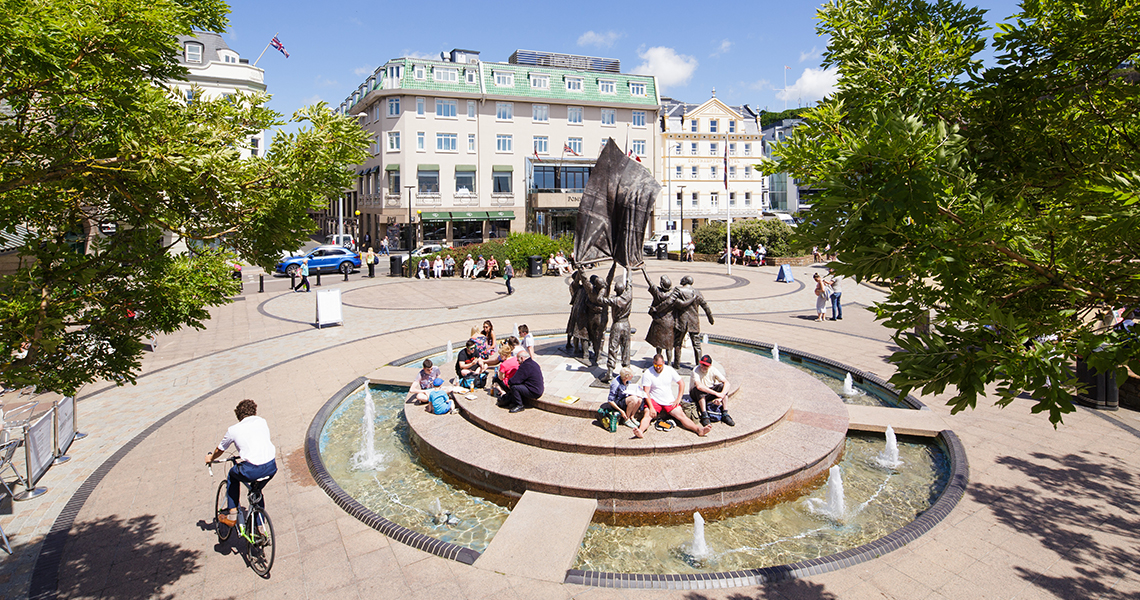 Planned to coincide with the 60th anniversary of the end of the Channel Islands’ involvement in the Second World War, Liberation Square was the scene of memorable celebrations in 2005, when a former soldier called Surgeon Captain McDonald unfurled a Union Flag from a building which overlooks the site – something he had also done on the same day exactly sixty years before.

Anyone who has visited the square will know that it is dominated by an impressive statue created by Philip Jackson, the renowned sculptor. What you probably weren’t aware of, however, is that this design was only agreed upon after the original idea received fierce criticism from Jersey residents. Originally, the sculpture was supposed to depict several ‘doves of peace’ being released into the air; locals questioned the relevancy of this proposal, however, with some noting that the food shortages in Jersey were so dire during the occupation that any doves that did appear at this time would probably have been eaten, rather than freed!

Fortunately, there is no controversy surrounding the appropriateness of the sculpture design that was eventually chosen. The highly moving monument shows a group of men, women and children raising the British flag in celebration of their liberation – something which records show did happen on 9 May 1945. The sculpture stands in the middle of a fountain made up of 12 water jets, each of which represents one of the island’s parishes.

Arguably Jersey’s most recognisable landmark, the lighthouse at La Corbière (the name given to the southwestern tip of the island) is nevertheless relatively new, having been lit for the first time in 1874.

Built on a tidal island that can be reached via a causeway at low tide, the lighthouse is imposing yet attractive and, despite not being open for public tours, has established itself as one of Jersey’s true must-sees. We mentioned earlier that the ruins of Grosnez Castle should be at the top of the list for anyone who wants to experience a beautiful sunset on their visit to the island, but the rocky land surrounding La Corbière lighthouse is, for some, every bit as magical as the light starts to die. 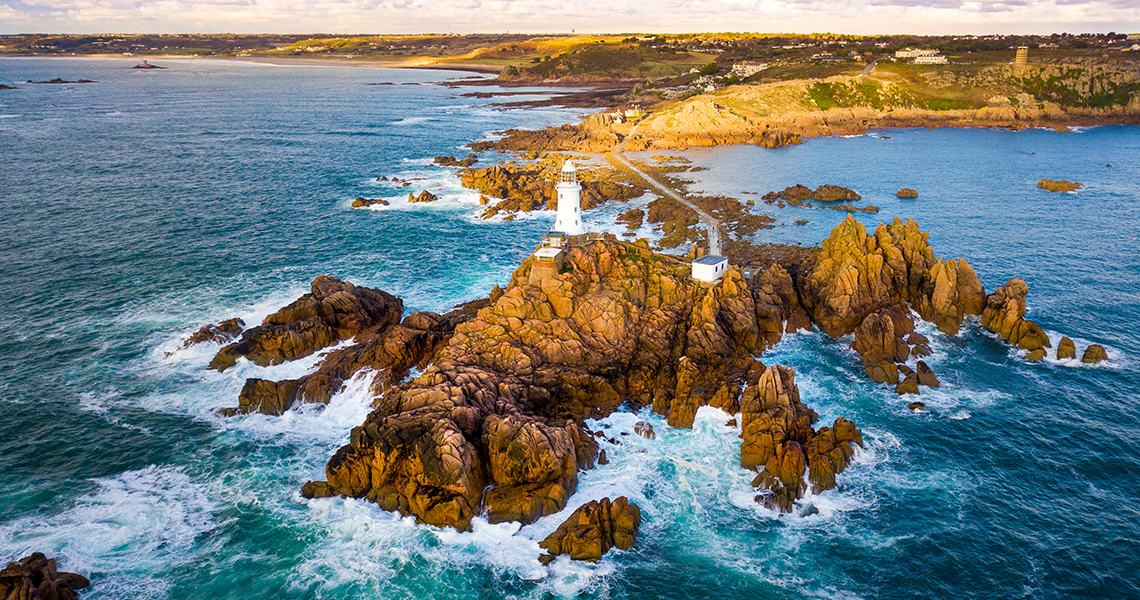 To enjoy a truly relaxing and leisurely look at the lighthouse whilst on holiday in Jersey, why not book a table at Corbière Phare, an excellent restaurant which is perfectly situated for taking in a view of the landmark as the sun goes down? Or, for the ultimate visit, you could always stay overnight! The Radio Tower building is the only structure built by the occupying German forces in World War II that has since been repurposed as a self-catering holiday property; the tower, which has six floors, surely offers the most unique Jersey accommodation experience possible, providing guests with extraordinary panoramic views (including of the lighthouse), first-class amenities and the chance to literally step foot inside an important part of the island’s history.

The only potential problem that comes with exploring the lighthouse at La Corbière is that you will have to make sure you have enough time to stay there for as long as you need before the tide starts to rise. No landmark is worth getting cut off for, so don’t take the risk. Visitors have occasionally got into trouble at the lighthouse, which is why an alarm now sounds at the point when anyone who is still there should leave in order to give themselves enough time to get back over the causeway.