All information in this blog post is correct as of the publishing date,  19.03.20.

Many events in Jersey are currently under review. We will endeavour to keep this information up to date, however we advise checking directly with the event organisers.

Jersey’s wild coastline, tranquil countryside and fantastic selection of restaurants are just a few reasons to holiday on the island. Add onto that the mixture of historical and family-friendly attractions and it is the perfect destination, whatever the time of year!

If you’re planning a family getaway in the coming year, we have put together a calendar which gives details of some of the very best events taking place, allowing you to plan your Jersey holidays around anything that you and your family might like to experience. We look forward to seeing you soon!

The annual Jersey Boat Show has been an important fixture in the island’s calendar for over a decade, and proudly claims to be the largest free-entry event in the Channel Islands. Taking place over the Early May Bank Holiday, the Boat Show welcomes more than 30,000 visitors with a programme of activities appealing to all ages.

The event is held at St Helier Marina and as well as the usual fun you’d expect from such events, such as the numerous stalls selling local food and drink and live music performances, the highlight is the boats themselves. People flock to the Jersey Boat Show every year to discover a fascinating range of vessels, both large and small. Attendees can step on-board luxury yachts and fully operational Navy ships; the brilliant show offers you the rare opportunity to explore some of the world’s latest and most technologically advanced watercraft.

Fans of classical music will want to make their visit to Jersey coincide with the excellent Liberation International Music Festival. It was first held in 2009, and the premise of the event is a little different to other classical music festivals; the theme is based on the island regaining its freedom after occupation during World War II. The festival’s performances focus on the difficult period in Jersey and the power of music to emotionally liberate listeners.

Along with the internationally renowned artists in the line-up, one of the best things about the festival is the venues the concerts are held in. Jersey isn’t short on impressive buildings, and the festival’s organisers make full use of the amazing local architecture, with past venues including Mont Orgueil and military bunkers. Anyone attending the festival this year will be guaranteed a special experience, especially as it’s the 75th anniversary of the island’s liberation, and there will be a gala with the Royal Ballet and an alfresco concert at St Aubin’s Fort.

Liberation Day (9 May) – Liberation Events are under review for 2020

If you have visited Jersey during May, you’ll know that throughout the month, the island’s residents go all out to mark the liberation of the Channel Islands. The peak of the commemoration is on 9th May, known as Liberation Day, where there will be music, parades, a military vehicle cavalcade, and plenty of singing and dancing.

The day is celebratory rather than sombre and well worth experiencing if you are in Jersey. In 2020, as the island celebrates the 75th anniversary, there will be an extra public holiday on Friday 8th May rather than Monday 4th. 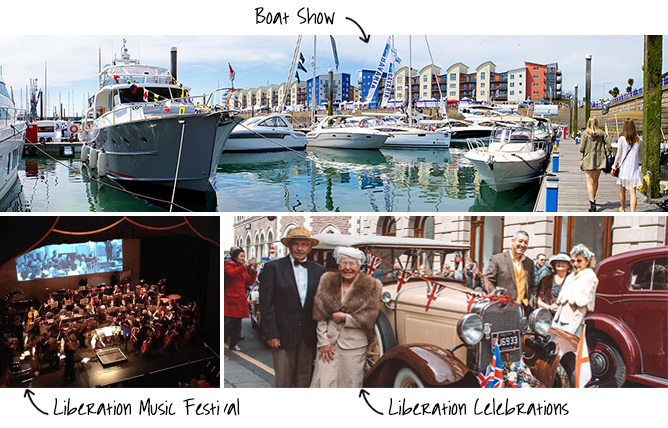 The winding roads and idyllic scenery make Jersey the ideal venue for hosting a classic car event, and the Jersey International Motoring Festival is everything an enthusiast would hope to find. The gathering of local and visiting stunning automobiles is a treasure trove and is sure to attract even those with a passing interest in vehicles.

A lot gets packed into the four days, and there will be a static motor show, competitive hill-climb races for classic cars and motorcycles as well as demonstrations of various vehicles. In addition to the cars, there will also be food stalls, trade stands and live music.

There is no better way to spend a summer’s evening than chilling out in the sunshine and listening to some fantastic live music. The Sunset Concerts are held at the height of summer, in the beautiful natural setting of Mont Grantez in the north-west of the island, which overlooks St. Ouen’s Bay. The few hours watching the sun go down while lively music can be heard is truly memorable. The acts for 2020 are yet to be announced but you can expect energetic pop, blues and jazz, and you are encouraged to bring your own picnic.

Jersey’s epic coastline has made it a coveted surfing destination for many, and to help celebrate one of the island’s favourite activities and bring it to a wider audience, the Jersey Surf Film Festival was launched. Though 2020’s festival is yet to be confirmed, if it goes ahead then visitors can expect to enjoy outdoor film screenings, workshops, surf lessons and talks.

Wonky Town is a festival built around the premise that if the world was ending, you’d have a massive party! The post-apocalyptic themed one-day festival has four districts all featuring brilliant musical headliners and immersive experiences. The event comes from the organisers of the Weekender Festival, and if Shangri-la, Bloc 9 or Lost Village are your thing then this will be right up your street!

The Battle of Flowers has been among the biggest, best and most loved events in Jersey for over 100 years. The unique spectacle is like nothing else on Jersey and sees an incredible array of floats proudly paraded through the island’s streets, with the displays consisting of countless intricately arranged flowers.

The processions are spread across two days, with the second being held at night. Both are unmissable; seeing the colourful floats in the bright sunshine is a sight to behold while seeing them at night lit up with twinkling lights is an unforgettable experience. The parades are joined with musicians, dancers and bands to create the carnival magic.

The event started as a one-off celebration to mark the coronation of Edward VII in 1902 but was so successful it become an annual celebration. It was paused during the two World Wars and revived in the 1950s to focus on the community and benefit the growing tourism in the Channel Islands. Today, it sees hundreds of spectators taking to the street to watch the magnificent floats pass by.

For many people, summer is not summer without a hedonistic music festival to attend, and on Jersey, the Weekender Festival is just that! There are five stages featuring performances from hundreds of talented locals, UK and international artists as well as the usual fun and games guaranteed at a summer festival. The first acts to be revealed are The Showhawk Duo and Roman Kemp. Tickets are available already with more of the line-up to be revealed in the coming months.

One of the things that draws people to Jersey is the island’s natural beauty, which is abundant on the coast and in the peaceful green lanes network that runs through the verdant countryside. Jersey is stunning as the summer draws to an end and autumn starts to creep up, with the leaves beginning to fall and foliage turning to orange, yellow and red. It is this reason why the local National Trust is holding the third annual Walking Through Autumn Festival.

The festival is more than a series of walks through some of the loveliest spots on the island as the five-day event will also include plenty of exciting activities such as touring the water mill, foraging on the beach and bat walks at sunset. By the end of the festival, you’ll have explored more of the island than on your typical Jersey holiday!

The Jersey International Air Display is so well established that local schools and shops will close so they can look up to the skies to take in the spectacle of the many planes on show. There are old and new planes, military and commercial zooming past, some travelling across the world to be part of the air display, and best of all it is completely free!

Highlights include a display of classic World War II planes such as the Lancaster Bomber and Spitfire, and at Jersey airport, there will be a static display event, with pilots on hand to educate about the incredible machines. The Air Display is held in St Aubin’s Bay, as the natural shape creates an amphitheatre so everyone will have a good view of the action!

If you’re holidaying in the busy month of September, you may want to get involved with the Healthy Living Festival. Held at the Radisson Blu Hotel over three days, it is a celebration of everything related to fitness, beauty, health and wellbeing. Over 40 exhibitors will be there, from therapists to nutritionists, and there will be workshops and demonstrations, along with a chance to sample and taste products. Admission is free, so you are welcome to attend any of the workshops and talks that may interest you.

The Jersey Festival of Words was launched in 2015 and has become firmly established as a highlight of the UK’s literary events calendar. There are exclusive readings and interviews held across some of the island’s most famous and visually striking locations, so it is no wonder that the festival attracts an increasing number of visitors, not to mention the stellar line up of poets and authors.

There are talks and readings, child-friendly events and workshops, covering fiction, non-fiction, poetry and music. Tickets can be purchased from the event venue’s online systems, with venues including Jersey Library, The Georgian House, Victoria College, Jersey Arts Centre and Jersey Opera House.

Jersey boasts delicious local food and drink and Tennerfest is a six-week-long food festival that allows visitors to sample the best dishes from several of the island’s restaurants and cafes, tucking into three-course meals from as little as £10! The annual event sees eateries create special menus which encourage diners to try places and food they never would have before.

It goes without saying that the opportunity to indulge in gourmet cuisine at low prices doesn’t happen very often, so don’t miss out on your chance to attend Tennerfest! Take advantage of the amazing offers of the set menus costing £10, £12.50, £15, £17.50 and £20. 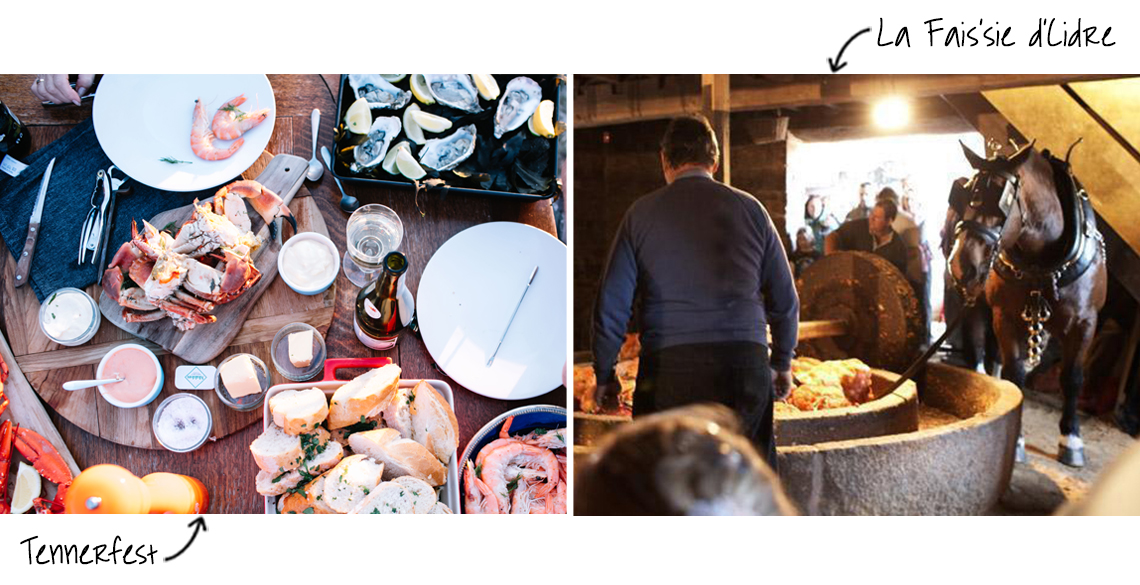 The annual Faîs’sie d’Cidre (Cider Festival) is an annual event celebrating Jersey’s rich heritage of growing apples and making cider, taking place in the grounds of Hamptonne Country Life Museum. The festival is a wonderful day out for the whole family, and there will be traditional cider making, black butter making, stalls, games and live music, as well as the chance to taste some of the delicious drink!

At The Elms, the headquarters of the National Trust for Jersey, you can participate in making Black Butter. A dark, sweet apple sauce, the festival lasts three days, starting off with peeling the apples and ending up with the delicious product in jars. It is a family-friendly event and there will also be pumpkin carving, live music and food available.

It may seem a long way off, with last year’s celebrations still a recent memory, but Christmas will be here again before you know it, and there’s no better place to spend it than Jersey. La Fête dé Noué is the name of St Helier’s month-long celebration of all things Christmas leading up to the big day, and the capital definitely takes it seriously! There is everything from late night shopping and seasonal markets to carol concerts and pantomime. Every Christmas enthusiast will find themselves at home.

Previous post Sport in Jersey: 2020 Calendar
Back to Blog homepage
Next post How to Enjoy an Eco Friendly Holiday in Jersey